Chris Dunn was born 1946 in the British city of Manchester, United Kingdom. He has written the book The Giza Power Plant: Technologies of Ancient Egypt, which claims that precision machining is evident in ancient Egyptian structures, particularly in the Giza pyramid complex. In this interview, the scientific explains some features of his unique research about the technology that could have been used in some megalithic sites all over the world, including the Great Pyramid.

Ankh Ancient Archaeology: You proposed that the Great Pyramid was a kind of huge machine, which was built in order to obtain energy from the Earth’s vibrations, according to some very special features of this monument. Anyway, the rest of the Egyptian pyramids (including the big ones from the Old Kingdom) don’t have these features. Do you think there was only one “powerplant”? And, what was the purpose of the other pyramids, assuming that they were not tombs, as many alternative authors have claimed?

Chris Dunn: While the rest of the Egyptian pyramids do not have the same features as the Great Pyramid, there all have two features in common. They are pyramids, and they have a descending passage to a subterranean chamber. Other similarities can be found in the acoustic characteristics of the shape of the interior spaces. For instance, the Grand Gallery in the Great Pyramid has corbelled walls – or a series of steps whereby the walls reduce in width as it rises. Other pyramids, the Red Pyramid at Dahshur, for instance has similar features, and the acoustics in each is quite remarkable. Having concentrated on the Great Pyramid I surmise that the other pyramids functioned in a similar fashion but not necessarily to the full extent of the Great Pyramid.

I will speculate that all the pyramids were constructed to respond harmonically with the Earth. Functioning in this manner they were able to draw energy from the Earth – this energy being seismic energy. Some of the pyramids may not have been equipped with the means to convert this energy to electromagnetic energy, I believe the Great Pyramid did this, and perhaps we may discover that others did also. However, just the ability to draw destructive seismic energy from the Earth would have immense benefits to society.

AAA: What is your opinion as a scientist about Carbon-14 dating? As a scientist, could there be another most accurate way to date ancient stones and monuments?

CD: Carbon-14 is absorbed by living biological materials. When a tree is cut, it stops absorbing C-14 and so a piece of furniture can be dated by when the tree was cut – assuming that it was shaped by hand within a reasonable period of time after it was cut. Stone does not absorb C-14. Ancient stone tools, for instance are dated indirectly by testing the sediment and other biological material around them. A stone wall with reliefs cut into it may collect lichen or other biological material, but there is no way to know when the material collected on the wall. Dating the Great Pyramid was accomplished by taking biological material from the mortar that was found in the joints. These methods draw questions about their reliability as many monuments have undergone repair by later cultures.

AAA: Do you think that the extraordinary samples of stonework we can find in Egypt were not “Egyptian” at all, but from a lost civilization previous to the dynastic Egypt? Are there unmistakable traces of machinery in certain Egyptian monuments and objects? 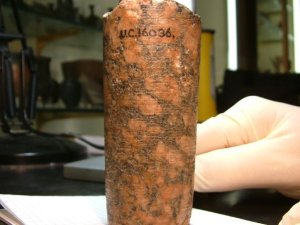 CD: There is a school of thought that a civilization existed prior to the ancient Egyptians called the Khemitians. There are also a variety of viewpoints regarding how far back this civilization existed. The dates range from 65,000 – 9,500 BCE. When considering the question of missing tools, or machinery, it is more understandable to consider a more ancient use and disappearance of them if we move the timeline back further. The traces of machine marks on ancient artifacts are unmistakable. Sir William Flinders Petrie wrote about them in 1883 in his book Pyramids and Temples of Gizeh, as I have in my two books, The Giza Power Plant and Lost Technologies of Ancient Egypt.

AAA: Could there be a relationship between the technology used for all these monuments and a secret ancient wisdom, which this Ancient Lost Civilization owned and mastered, related to the perfect knowledge of Nature itself, and related on electric and electromagnetic energy? In other words, do you believe that the builders used scalar technology or machines and systems based upon zero point energy?

CD:  I believe that much wisdom and science was lost from this ancient civilization. I’m not sure how secret it was to their general population. One could argue that the general public today may not have knowledge of our science and engineering, but that’s not because it has, for the most part, been kept secret. It’s because they have chosen not to learn it. I do believe they had mastered the harnessing and use of electricity. I do not know enough about scalar or zero point energy to comment.

AAA: You probably know the works by A. Stocks about ancient Egyptian stonework, in particular drilling techniques. Do you think their experiments and conclusions are valid? And, why do you think mainstream Egyptology is ignoring all the available evidence about an astounding and extremely accurate ancient technology?

CD:  I insist that in order to explain what the ancient Egyptians accomplished you have to explain the most difficult aspects of their work. The first task is to describe it as completely as possible. I believe that the work of Mr. Stocks in attempting to explain the drilling and sawing techniques is certainly a valid exercise. I have studied his findings. I have attempted to replicate his results and find that they do not have the same marks as those found on the ancient stones. I was disappointed that he did not provide a side by side comparison with the drill core he produced and the drill core the ancient Egyptians produced. In my experiment I show high resolution photographs of both and they are not the same.

AAA: What is your opinion about the clear similarities between the stone technology we observe in South America (Puma Punku, Sacsayhuaman, Cuzco, etc.) and Ancient Egypt (Osierion, the Valley temples, Serapeum…)?

CD: There seems to be a period in the Earth’s history when civilizations around the world existed and were using tools and methods that cannot be determined if we limit ourselves to what is found in the archaeological record. I have been to Peru and Bolivia and taken measurements with modern instruments and found, as I did in Egypt, precise flat surfaces in Peru and in Bolivia to within .0005 inch. That says something about the sophistication of these ancient cultures.

AAA: Could it is possible that the pyramid builders used artificial stone, like for example manufactured limestone, made of limestone, natron salts, kaolinite clay and lime, as Dr. Joseph Davidovits claims?

CD: It is possible that these material were used for patching and other uses. For instance, between the bedrock and the basalt platform that is located east of the Great Pyramid, is a layer of what appears to be material that was placed there in semi liquid form before the basalt blocks were laid – similar to laying tiles today. This material allowed for the underside of the basalt blocks to be irregular.

AAA: Which do you think it was the function of Helmholtz resonators, that according to his hypothesis those were in the corridor just before the Chaos Chamber? Which were the functions of the 2 forgotten pyramids in Dashur, where no coffin has been found?

CD: I was told by a physicist that the King’s Chamber was more likely the Helmholtz resonator and within the Grand Gallery were resonators that converted vibration into airborne sound. As a system they functioned to maximize the vibration of the granite beams above the chamber.

AAA: About the three Pyramids in Giza, do you think they were built at the same period of time? Could they be pre Egyptian? In other words, could they be the legacy of a Lost Civilization?

CD: I think the pyramids at Giza were constructed in the same time period. They may have not been built at the same time, though I believe the Great Pyramid was the last to be built due to its improved sophistication. They are definitely pre Egyptian and are monuments to the genius of an advanced lost civilization.

Let us analyze sunni islam for its truths and untruths